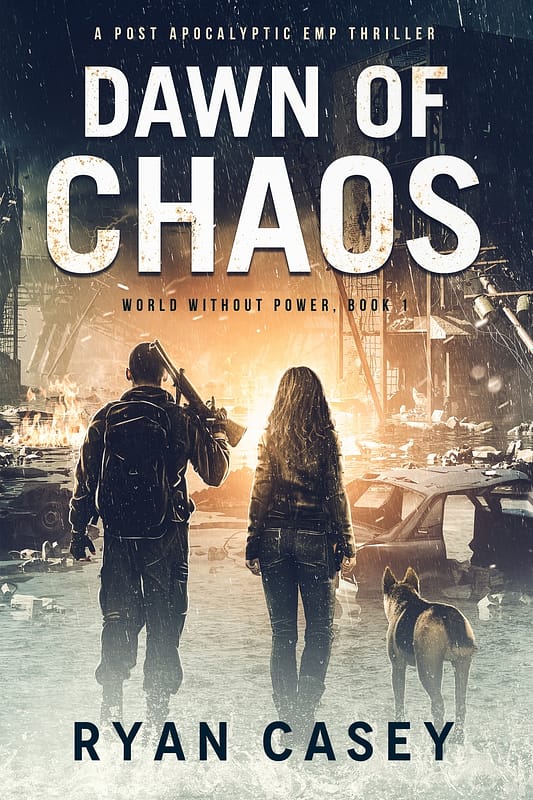 Devastating floods. A catastrophic EMP. At the dawn of chaos, who will survive?

In the middle of the worst flooding on record, a devastating EMP wipes out the nation’s power, plunging the country into darkness.

Cars crash into one another. Planes tumble from the skies, killing everyone on board. Survivors battle for their lives in flooded cities, bereft of mobile phones or media to aid them. And with food and supplies already crippled by the flooding, the nation is very rapidly descending into chaos.

Sam is an ex-military man who knows a thing or two about survival. He is in the middle of the city with his loyal dog when the power goes out. Right away, he suspects the worst: an EMP event, crippling the nation and causing mass panic and desperation.

Trapped in the ruin, he only has one goal in mind: getting out of the city and getting back home before things go from bad to worse. But does he have what it takes to make it out alive? Or will this journey prove his most dangerous challenge yet?

Tara is trapped at home by her controlling boyfriend, Jonno, when the world turns dark. After escaping his clutches, she soon realises that something is desperately wrong outside. Trains are at a standstill. The flooded roads are filled with broken-down cars. And her phone won’t work…

Does she have what it takes to adapt to this world without power and make it back to her parents’ place?

Or will her psychopathic boyfriend catch up with her and prevent her escape?

At the dawn of chaos… who will survive?

Dawn of Chaos is the first book in the new post apocalyptic EMP survival thriller series. If you enjoy stories of ordinary people thrown into harrowing new circumstances, you’ll love the World Without Power series.

Amazon (Non-US)
Share
Facebook Twitter Google+
Preview
Disclosure of Material Connection: Some of the links in the page above are "affiliate links." This means if you click on the link and purchase the item, I will receive an affiliate commission. I am disclosing this in accordance with the Federal Trade Commission's 16 CFR, Part 255: "Guides Concerning the Use of Endorsements and Testimonials in Advertising."