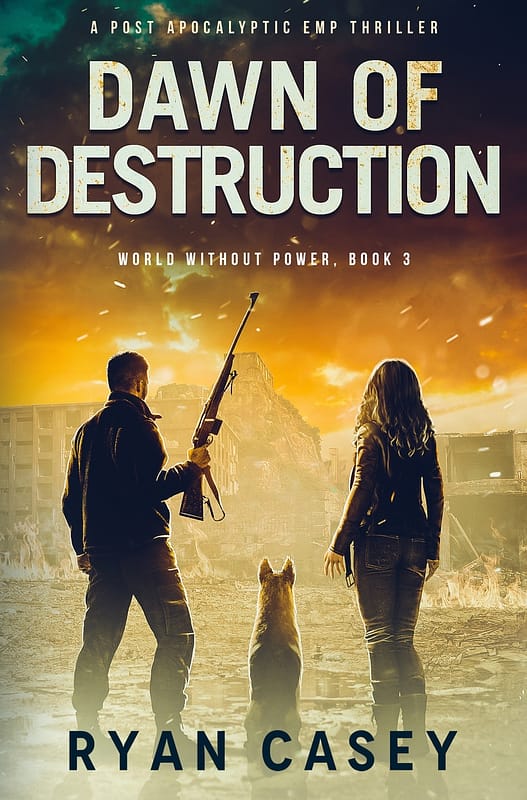 When the EMP strikes, will you survive the destruction?

One week ago, a devastating EMP crippled the nation’s power supplies, leaving survivors desperately trapped in a world without power. As supplies dwindle and order breaks down, society collapses into total lawlessness and unthinkable violence.

Sam and Tara are two of those survivors. After losing Sam’s home in a devastating flood, they are forced to head north to seek out new shelter, with a new group of companions.

But when a child in their group goes missing, they are both forced on a harrowing detour through a crumbling, chaotic city.

And the more desperate survivors they encounter, the more they realise that the powerless nation is already far more dangerous than they could ever have imagined.

Do Sam and Tara have what it takes to rescue the child and find shelter in the north? Or will this treacherous journey prove one too far for both of them?

Dawn of Destruction is the third book in a new post apocalyptic EMP survival thriller series. If you enjoy stories of ordinary people thrown into harrowing new circumstances, you’ll love the World Without Power series.

Dawn of Disaster
Preview
Disclosure of Material Connection: Some of the links in the page above are "affiliate links." This means if you click on the link and purchase the item, I will receive an affiliate commission. I am disclosing this in accordance with the Federal Trade Commission's 16 CFR, Part 255: "Guides Concerning the Use of Endorsements and Testimonials in Advertising."